A Preview of By Hand & Eye

By Hand & Eye by George Walker and Jim Tolpin is a unique book in the world of modern woodworking literature.  The typical fare today consists of very straightforward how to do this or that woodworking projects.  By Hand & Eye addresses the 'why' of woodworking through the eyes of design.

Design is one of the ephemeral concepts that is different to each person.  I call BS.  Actually, George and Jim, call BS.  The foundations of all design are the same and come to us from antiquity.  By Hand & Eye is a short course on shattering the common belief that designing original projects is hard, or impossible.  Sure, aesthetics in design are as varied as people are, but this book teaches you to find those foundational geometric elements of a piece and the proportions that bind them together.

I still find it hard to describe the book and don't want to turn anyone away from the title because of my dimwitted ranting.  So, I have to state that there are ten woodworking projects detailed in the book.  Even if you never read the design chapters, you get your money's worth in projects alone.  Some woodworkers only ever want to build from someone else's plan and there is nothing wrong with that.  The vast majority of us are hobbyists and want the most satisfaction possible from our recreational pursuits.

I can't call this posting a review because I still haven't finished the book.  I have started over three times and still have not read the projects at the end of the book, though I did leaf through them a couple times.  By Hand & Eye is not the kind of book you run through in a few hours and throw on the shelf for your friends to admire.  The book is closer to a textbook than recreational pulp fiction.  OK, that last sentence was a softball.  The book IS a textbook.  There is a ton of information packed in the 200 or so short pages of By Hand & Eye.  You can literally spend hours making up exercises to convince yourself of the validity of the information.  Or you can ingest a broad overview to help you evaluate the work of others.  Don't forget about the projects at the end of the book.

Everything considered, By Hand & Eye has something for every woodworker in it.

I'm surprised nobody has created a bundle with the book, dividers, sketchbook, and quality mechanical pencils.

I'm spending so much time on this book because of the blog.  I feel I need to come up with original projects so I can get into more detail here.  When I build someone else's project, I'm limited by copyright laws as to the level of detail I can post.  There is also the question fair play; publishers spend money to generate original content so they can make more money.  The Pragmatic Woodworker blog is a labor of love and it is a supreme jerk move (aka King Richard) to devalue publisher's original content by posting it here for 'free'.  I'm sure there will be more from By Hand & Eye on the blog in the future.  For now, please accept this preview as an endorsement of the work.
Posted by S. Stahl at 7:59 PM No comments:


I'm working on a 15th century bench, but don't tell anyone.  I got a metric butt load of wood from a fellow church parishioner.  The wood is Northern White Cedar from a barn that stood for 90 years.  I'm building the bench as a surprise thank you for the wood.

The picture above is the completed joinery on all major components except the seat.  The tenons on top are in a V shape and are compressed with clamps immediately before placing in the mating mortise.  The expanded wood completes the piece and locks everything in place.  That last step is a one shot deal.

The cross members are held to the legs with a bridle joint.  Put both of your hands up with your pointy and angry fingers in the air (the classic victory sign).  Then put your hands together with the V shape interlocking (a finger of the opposite hand should be tickling your palm).  That is a bridle joint, but I'm not sure the above description is any more clear to anyone who doesn't already know what a bridle joint is.

The top tenons necessarily prevent the table saw blade from reaching the full depth of the saddle joint on the bench legs.  I used the dado stack, Band saw, hand saw, rasp and chisels to create the saddles in each piece.

The dado stack made short work of the saddles in the cross members.  On the left side of the picture behind the bench leg you can see the fence I screwed to the miter sled.  My first sacrificial fence several years ago was quite the production.  I checked, rechecked, and checked again everything on the fence to make sure disaster wouldn't happen.  Move forward to now and it is just a stupid sacrificial fence that took maybe a minute to size, cut, affix and run over the dado stack.  I've remarked before about reaching woodworking milestones, so this post is no different in that regard.  Complex actions  become commonplace and even comfortable with time and repetition.  Obligatory warning against familiarity breeding contempt when it comes to safe practices:  NEWSFLASH:  table saw blades cut without a conscience, including the Sawstop line of saws.

The mating saddle on the bench legs was a bit more difficult.  My dado stack is an 8 inch.  A lot of folks say the six inch dado stack is all you'll ever need.  However, sometimes you might be working on a saddle joint right next to a tenon.  The 8" dado stack at full height was able to engage the saddle for about a half inch on the legs.  I did this right after the cross members to guarantee a correctly sized saddle mate.  The rest of the saddle was cleared with a hand saw and band saw.  The hand saw was used to complete the end cuts.  To save time, I used the band saw to knock out most of the waste.  Rasps and chisels were used to clean up the cuts in all eight saddles.

All that is remaining is to cut the mortises in the seat and complete the decorative profiles on the cross members and legs.
Posted by S. Stahl at 3:30 PM No comments:

Elf Planes Are Far From Magic

For years I have used microplanes and files instead of rasps.  The microplanes are cheap--both in quality and price, but they cut wood like the dickens when used correctly.  The problem is they easily cut more than needed.  Furthermore the rasps generally available today suck.  Yes, they suck the joy out of woodworking because they don't actually do much to the wood.  I could not afford product from the likes of Auriou in the past

I suppose a definition of 'elf plane' is in order.  The term came about as I was explaining how they work to my kids.  I showed them a jack plane and explained that each little piece on the microplane was like a little elf holding one.  So, naturally, it was christened the elf plane.  Now I have Jack, Block, Smoother, Jointer, and Elf planes.

Getting back on track.

Highland woodworking had a sale on Iwasaki files a while back and I picked up my first two.  Though they are billed as files, these things are really rasps.  Good rasps. 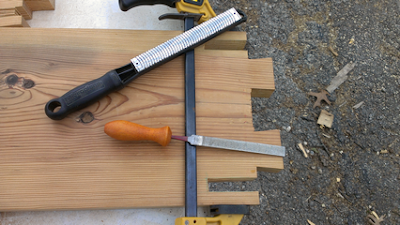 Above is a picture of my latest microplane and the Iwasaki flat rile/rasp.  The mortise being worked on is for a replica of a 15th century bench.  Note for a second the 'V' nature of the tenons.  The mortise they go into is the same size as the base.  The tenon is compressed with clamps and inserted into the mortise; the expansion of the wood then holds the bench together.

The rasp fits tight spaces like this far better than the microplane.  The rasp also has a true flat surface to reference itself against; the microplane has a slight curve across it's face. 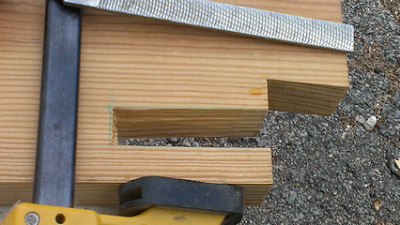 Here is a closeup of one of the stretcher mortises.  The work with the tool is almost complete in this photo.  The clamp is on with the barest of pressure due to it's job being prevention of breaking the narrow strip of wood on the outside.  I probably could have worded that better, but it is late.

EDIT:  I really must have been tired last night as I left off the whole last paragraph somehow.

I am now convinced of the superiority of a quality rasp after my experience with the Iwasaki files.  The cut of the wood is more controlled.  The durability of the medium and flexibility of the thinner profile enable a wider variety of uses at various stages of a project.  I am not getting rid of the elf plane as they are just too darn useful for hogging off wood.  Besides, you just never know when you may need some grated cheese or lemon zest while working in the wood shop.
Posted by S. Stahl at 8:14 PM No comments: