I Sinned In The Cathedral 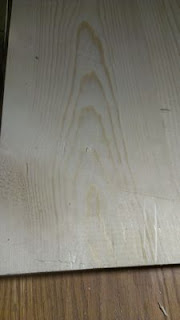 I had to make two small panels for a wooden train play table.  You would think that gluing some planks together would not generate much controversy, but you would be wrong.  There are actually three camps when it comes to panel glue up.

The first camp is the Power Tool Brigade.  Their well ordered encampment is segregated by regimental colors of muted yellow, battleship grey, and verdant green.  Other lesser companies lend their guidons and pennants to the landscape.  In lockstep unison they declare that panels should be chosen strictly for appearance in the final product.  The panel manual has standard procedures for a machine to subdue all possible wood grains.

The second camp is filled with the Hand Tool Knights.  Their tented pavilions snug the undulating countryside disturbing the native flora and fauna in the least way possible.  Retainers and vassals surround each pavilion according to their pledges of fealty.  Through oral tradition and a small body of written work, the panel philosophy is shared:  panels should always be assembled with grain going in the same direction.  Uniform grain means uniform labor to the tools.  The wood will sing for itself to the right soul.

The third camp is shrouded in mysticism and indeed is more cult than camp.  The Samurai Ninja Templars offer what at first glance is the same advice as the Power Tool Brigade, that panels should be chosen based on appearance.  The difference is in the selection process.  Those ascended to the SNT ranks painstakingly commune with wood seeking out the perfect form it would like to participate in.  Their deep insight into the tools and medium instill the certain knowledge that they can coax the form out of the wood no matter what grain problems exist.

My sin is that I could not commit to one of the camps.  I chose the orientation of panel components based on appearance.  However, I don't own machines wide enough to subdue a glued 20" panel; nor do I have enough mad skills at hand planing to deal with wandering grain patterns.  I ended up with two panels that were a real bear to plane.  The goal was for a surface that showed hand planing in order to 'prove' hand made work.  Let's call it "80% planing".  The end result is more like 60%.  On the plus side, my block plane got one heck of a work out trying to cure my ills.

Here is the panel that gave me the most trouble.  I know there is not much detail in the web version of the picture. 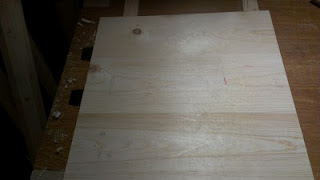 The ultimate solution was sand paper.  More on the train table in future posts.
Posted by S. Stahl at 10:27 AM