A while ago, I built my first Dutch Tool Chest.  I have been working out of that chest ever since.  That may sound impressive, but two successive shoulder surgeries have REALLY curtailed my productivity over the past two years.

I even built a second Dutch chest since the first--look for a full write up some time in the future.  One thing I did not do was put the lid on the first Dutch chest.  I've had a panel glued up and painted since the the first chest was finished, but I never applied the hardware and hinges.  I couldn't stand putting a board on top of the otherwise completed chest any longer, so tonight I put the hardware on the darn thing--with a twist: 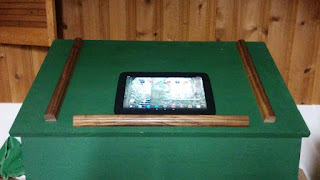 The rails to the left and right are battens.  I was going to put the battens in the usual place on the bottom, but at the very edge of the lid so they would act as a dust shield of sorts.  Unfortunately, I didn't leave enough room for comfort for the battens to do their job.  Putting the battens further inboard on the bottom would also impinge on my plan for that tool space.  So, I figured to dress them up and put them on top.

While working on the more eye friendly battens, an idea occurred to me to use the rest of the space for more than decoration.  Above you see the fruition of my idea.  I placed a ledge on the lid to hold books, papers, or my tablet. 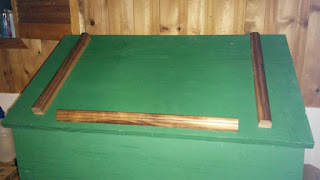 I will put one on my second tool chest as well, I believe.

Here is a shot of the open lid: 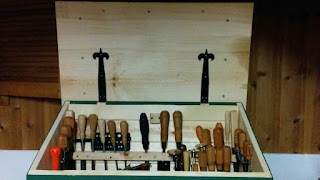 I think the next big tool storage project will a Schwarz style Anarchist Tool Chest, but I'm in no hurry to build it.
Posted by S. Stahl at 8:01 PM