When Does Pragmatic Become Stupid? 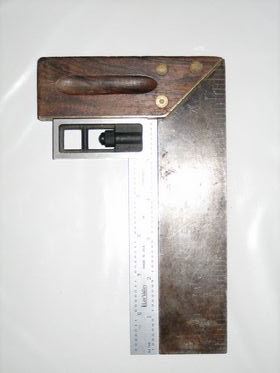 Apologies for the larger than life photo and my poor photography skills.  I'd blame the camera if I thought anyone would believe me.

Above you see the small squares I have been using for a long time.  The brass and rosewood number is a True Value branded generic square that I paid a quarter for years ago.  The supposed backstory is this square served faithfully for nearly thirty years; I highly doubt it, but who knows.  The smaller square is from Lee Valley and is two years old this month.

The highly overlit picture is my attempt to show the small gap between the two squares at the elbow.  The True Value square is off by about 1/32 of an inch over six inches.  As near as I can figure, the True Value square has been dropped one too many times.

I'm faced with the question of is it time to replace the square?  For most operations, a 32d of an inch is no big deal.  But what about when it is, or said another way, can I live with it being off?   I think I already know the answer. Time to put a square in the project queue.  In the meantime, I still have a Starrett 12" square
Posted by S. Stahl at 7:22 PM